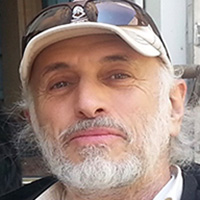 As the son of Julian Beck and Judith Malina, The Living Theatre’s founders, I was raised in the vibrant and expansive Off-Broadway theatre world of the 1950s.

This included – of course – performing in all the children’s roles in the theatre’s productions. And also, being a part of the astonishing milieu of artists, writers, poets, dancers, and painters who frequented the theatre – and our apartment.

In clear addition to their creative works, my parents were active in many of the social freedom and peace movements of those times, and I was introduced to the organizers and offices of many of these.

Julian and Judith gave over one of the studio rooms in their 14th Street Theatre to start-up peacenik groups and civil rights activists. I worked there in the afternoons after school, learning how to do mailings, printings, posters, phone trees, and other social organization.

After the theatre – and my parents – left the United States (because of political issues with the U.S. government) and began an ‘endless’ tour overseas, I remained in New York, living with Julian’s mother, Mabel, and attending high school.I worked then with the Student Peace Union and the War Resistor’s Leagueorganizing anti-draft and anti-war protests during the escalation of the Vietnam War.

In the fall of 1967, I entered Reed College in Portland, Oregon where I studied Humanities. With friends from the Portland peace movement, the back-to-the-land movement, and the psychedelic, arts, health and yoga communities we produced the Vortex Festival in the fall of 1970, a free celebration with music and camping that drew 50,000 people.

Following that I moved with friends to a back-to-the-land community, Rainbow Farm, in the Coast Range along Oregon’s Smith River. We grew all manner of organic veggies and worked with a number of food co-operatives and organic seed distributors. We began a process of sustainable forestry that is a multi-age, multi-species progression.

With friends from surrounding experimental communities, the vision of bringing together all the various parts of the numerous new social movements, gave rise to the Rainbow Gatherings. Beginning in 1972, I have worked with these free, non-commercial events,held on remote forest or mountain lands, which have brought together people from diverse backgrounds and numerous creative fields in over fifty countries.

In the 1980s I lived and worked in the East Village of Lower Manhattan, where the community gardens were beginning to sprout. I was able to develop a Children’s Gardening Program that became integrated into the public school system, and with the help of the Trust for Public Land, I co-authored, Plant & Grow!Teacher’s Guidebook for an Outdoor Children’s Gardening Program for Elementary School Classes.

In 1983 when The Living Theatre returned to New York, I assisted the company and my parents with technical, archival and printing work.

We retrieved Julian’s cachés of paintings, drawings, set and costume designs from the numerous friends and relatives where he had left them before leaving the States with the theatre two decades earlier. I worked with salvaging these, as well as assisting with literary, press and other theatre affairs.

During this time I began to develop a gem and mineral business, Natural Stones, which opened in Santa Fe, New Mexico, USA in 1994.

Since that time I have been living in Santa Fe with my wife Jenny. I continue to work in New York several times a year at several goldsmithing and jewelry-making studios. And I lecture periodically about turquoise at the Santa Fe Museum of Indian Arts and Crafts.

After Hanon Reznikov’s dispersion, Judith asked me to join the Living Theatre’s Board, a position that I currently enjoy.

Judith dispersed in 2015 but the Living Theatre is continuing to produce with a new generation of theatre artists.

Most recently, I have authored a book of memoirs, True Stories, Tales from the Generation of a New World Culture, which is both a detailed accounting of many of the incidents, meetings and events of my life, and also a philosophical commentary on where we are headed as a human species.

Regarding my work with the Fondazione Morra

The synthesis of painting, poetry, sculpture, dance and theatre that developed in the Beat and post-Beat Generations let artists explore more than just one discipline and led to the interactive productions such as the Happenings, The Living Theatre’s Paradise Now, and a broad range of participatory arts that today are still engaging the public. Today these multi-disciplinary art forms are flourishing everywhere from street theatre in small towns to extravaganzas in glitzy venues.

The records of the growth and development of these truly modern arts are being collected, preserved and made available by Fondazione Morra to the next generation of artists whose job it will be to carry this creative work forward through future time.

My own familiarity with the collection of Julian Beck – my Father’s artworks – including stage and set designs, watercolors, oil paintings, costume designs and collage masterpieces gives me unique ability to annotate and verify.

My work over disparate years with The Living Theatre has given me much understanding of the interrelation of many contemporary writers, dancers, performers, and artists with the community of peace activists, justice advocates and social movers.

My work with environmental, social and community activist groups has given me perspective to see how contemporary arts can shine a light and guide our culture ahead. Because, after all, that is what the arts do, by showing us what is, and by showing us what could be.