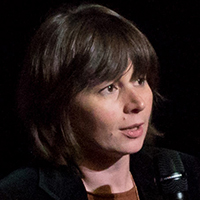 Eva Fabbris (1979) lives in Milano. She is a curator and art historian. She obtained a PhD in Humanities from the University’ of Trento. Since February 2016 she is part of the Curatorial and Research Department of Fondazione Prada in Milan. From 2013 to 2016 she was curator and coordinator of Back to the Future for Artissima, Turin. She worked in different curatorial departments in Italian museums (she was curatorial assistant at Museion in Bolzano, in 2008-2009 and adjunct curator at Galleria Civica in Trento in 2009-2010). She was co-curator at Kaleidoscope Project Space in Milan with Michele D’Aurizio in 2011-2012 and then, as independent curator she took care of solo and group exhibitions for international institutions, among which the Nouveau Musée National de Monaco, Montecarlo, la galerie de l’erg, Brussels, Triennale di Milano and Fondazione Morra, Naples. As guest lecturer she gave talks and conversations in many museums and schools as Centre Pompidou, Paris, Daimler Foundation, Berlin, HEAD, Geneve, GAM, Turin and in Italian universities. She is co-editor of “Arrow of Time”, the book recently published by Humboldt Books dedicated to filmmakers Yervant Gianikian and Angela Ricci Lucchi.

She contributes to Moussemagazine, L’Officiel Art Italia and Flash Art.