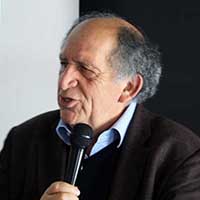 In 1981 he won the Saint Vincent Prize for Economics and in the following years established himself as a Research Scholar at the London School of Economics and a Visiting at the SIRCED of the same School.

In 1987 he was an OCDE Consultant in the Science and Technology Division.

In 1990 he was Head of the PhD Program in Public Sector Economics of the University of Salerno and, from 1987 to 2000 and from 2006 to 2011, he was Director of the Department of Economic Sciences of the same university.

Over the years he has been responsible for several socio-economic development plans such as the one for Val D’agri in 1999 and the National Park of Cilento (UNESCO site) from 1999 to today. He was also the Scientific Director of the PIT of the Cilento National Park in 2002.

He coordinated the strategic program “Identity and Development” for the Basso Ferrarese area.

He is Director of the research series “The cities of men” and of the series “The City and the Other City”, the latter in collaboration with Maria Cristina Treu.

The large staircase of Palazzo Cassano Ayerbo d’Aragona, today known as Casa Morra, a visual art archive, announces the ambition of the ‘100 years of exhibitions’ project, with it wanting to be a post-vision of a process-project-path of knowledge and emotions through the game of the goose, this time open beyond alpha and omega, to produce urban standards with a broad spectrum of new generation culture for the city that is to come.

In starting the visit of the Casa Morra and the project, the young interns who present it will say that “Casa Morra is not a gallery”, even highlighting at times how vital it is for the Casa to present the soul of the artists through the existing archives. They will then say that “Casa Morra is not a museum in the classical definition”, although on an administrative and expository level it is to be recognized as a producer of themes concerning the conservation, maintenance and valorization of inventoried and classified artefacts like a visual art archive.

Casa Morra is not a monastery even if it is inhabited by ‘contemporary Carthusians’, in addition to those inhabitants of the area who still live as if the ‘Urban Complex Casa’ were not in contemporary metamorphosis.

The ‘contemporary Carthusians’ also include those young men and women who, as interns or employees of the Foundation, are temporarily living there like residents, often coming from different parts of the world and learning about the themes of the representative artists of the archive as well as those who are attracted to the activities of Casa Morra.

Casa Morra is not a ‘closed-house-city’ because, as a project-process, it produces complex activities that, in addition to being recognized as an urban standard consistent with the urban planning of the City of Naples, aspire to present themselves as part of a city producing strategic contemporary intangible standards, in line with the competitive perspectives between internationalized cities (which reposition their cultural activities, proposing networks of museums and innovative contemporary art proposals) and visual arts (see the latest international reports on global cities).

With the reading of its archives, Casa Morra is now contributing to reading the idea of the art district with more elements, showing the design vitality of the Fondazione Morra, which is committed to strengthening the cultural infrastructures of the wider district – “Quartiere dell’Arte” (Avvocata Art District).